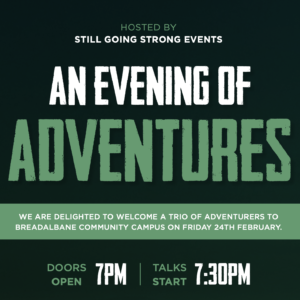 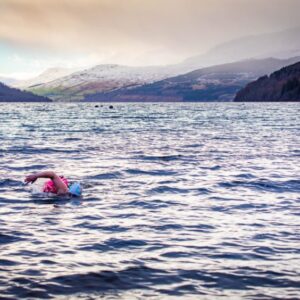 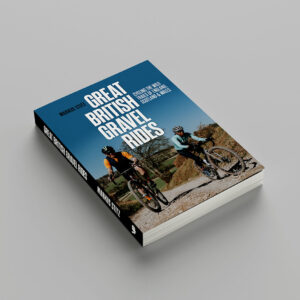 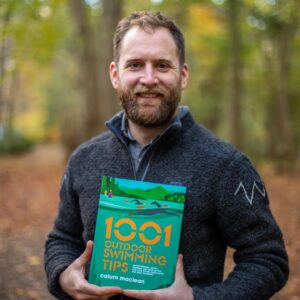 An evening of adventures

WE ARE DELIGHTED TO WELCOME A TRIO OF ADVENTURERS TO BREADALBANE COMMUNITY CAMPUS ON FRIDAY 24TH FEBRUARY.

Colleen Blair MBE
A keen open water swimmer since the age of 7, Colleen Blair became the first person to swim the gruelling North Minch crossing, which runs 25 miles from Orinsay on the Isle of Lewis to Rubha Reidh on the mainland. Colleen completed the crossing in 18 hours and 46 minutes in temperatures as low as 9C.

She was also the first person to swim across the notorious Pentland Firth, from mainland to the Orkney Islands, and swam the length of Loch Ness at the age of 19. She has also swam a ice mile in Loch Tay at Kenmore Beach. She’ll share stories from her many years of open water swimming in Scottish lochs, the sea and further afield.

Markus Stitz
Before cycling 34,000 kilometres unsupported around the world on a singlespeed mountain bike Markus Stitz mapped his first bikepacking route, the Capital Trail, and shortly after his trip he founded Bikepacking Scotland.

Calum Maclean
Calum is a writer, broadcaster and film-maker. Best known for his social media videos and BBC ALBA series Dhan Uisge, in which he shares his love for swimming in cold water.

From ice swimming in Scotland’s highest waters to creating the infamous ‘One Minute Midgie Challenge’, he’s never one to shirk a challenge. An ambassador for the Outdoor Swimming Society, Calum is author of 1001 Outdoor Swimming Tips.